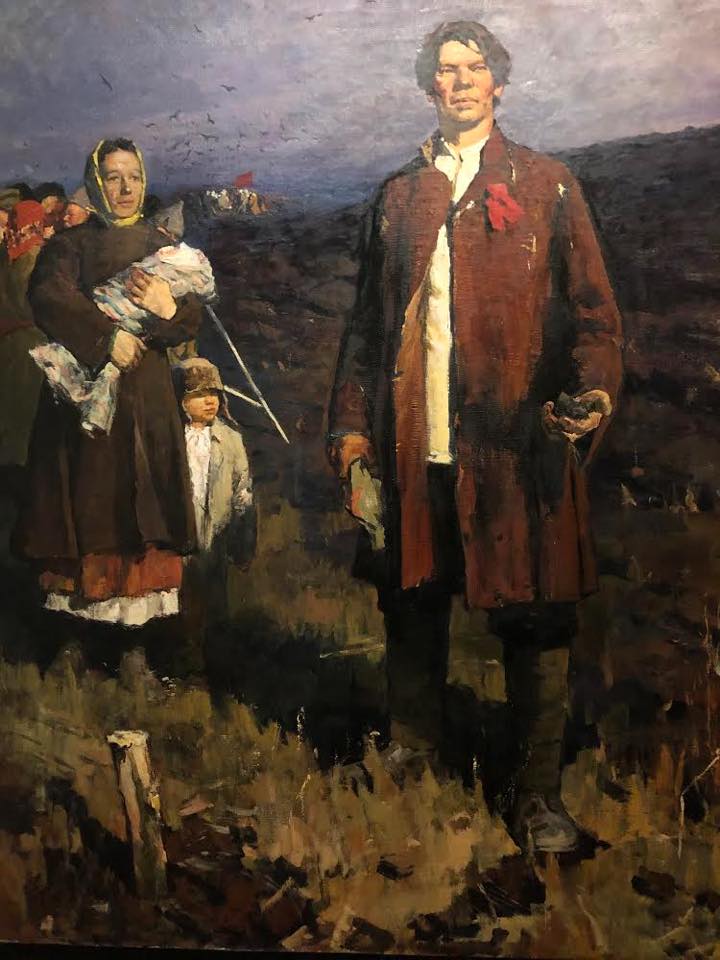 We are back online with Art-a-Day from The Museum of Russian Art. Sorry for the lapse – trying to deal with the quarantine situation. So “Leaders and the Masses” – A few days ago I asked the question: What will this exhibition have to say about this theme [of leaders and the masses]? Well, the answer is … nothing. It will say nothing about leaders and the masses. A bit unexpected, right? The thing is that exhibitions only work with artworks, not real life.

All we can talk about is how these specific paintings treat the theme of leadership. Now let’s try to ask some other questions. For example, how does this specific work fit into the official Soviet take on leaders and the masses? How is the official Soviet version of history (and a lot of these paintings are historical paintings) presented in this work?

Sometimes Soviet paintings are viewed as if they are no more than a mouthpiece for official ideology. This is not quite true. Each artist paints these works himself; he has to pick up a brush, dip it in paint and start making traces on canvas. And in doing this, he will have to make many…very many indeed…decisions on how to unfold the story, no matter how ideologically rehearsed it is. And some of these won’t be decisions but rather intuition, previous experience, preconceived notions, and feelings. In other words, these works are polyphonic. There are many voices talking through them. Well, everything is polyphonic, one may add, but these paintings are polyphonic in their own specific, Soviet way.

In “Land,” what kind of ideological content does the artist deal with? What first comes to mind are the Bolsheviks’ initial decrees, announced immediately after the Bolsheviks seized state power in October 1917. Most people remember the decrees through slogans: Peace to Nations, Land to Peasants, and Factories to Workers. These populist slogans were actually implemented, and that’s what this painting is about. A peasant family got their own plot of land. The husband’s red ribbon indicates he is a Bolshevik supporter. His Red Army hat in his right hand proves that he has earned the right to have this land by fighting for the Bolsheviks against the Whites in the Civil War. This is where the official part of the painting ends. Let’s now look at the painting closely. The family’s clothing looks Ukrainian which means this work is not just about Soviet slogans. It is also about Ukraine. First, look at the field stretching to the horizon – look how black and rich it is. Ukraine has some of the most fertile soils on planet Earth, called ‘chernozem’ (translated ‘black soil’), a piece of which the man clenches in his left hand. These people craved to have their own land for centuries and now at last they have it. But the painting is not all about how great it was of Bolsheviks to give land to peasants. It is also a statement on what peasantry is to this artist: family, fertility both of land and human procreation, desire for the ownership of the land. I am strangley reminded of Emile Zola’s novel “Land” with its somewhat brutal portrayal of farmers and their passion to own land. Look how firmly this peasant stands on the ground now that he knows it is his. But there is a silence in this work, a silence on the whole issue of collectivization. We will see more of these silences in other paintings in this exhibition.