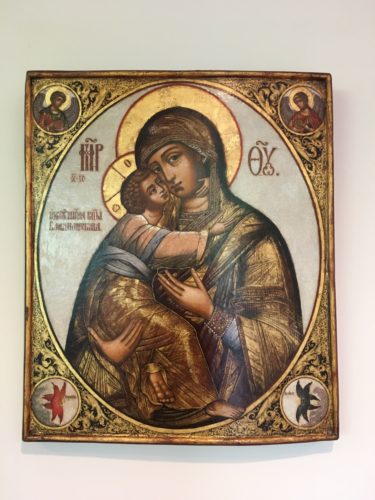 Mother of God of Vladimir
Russia, 19th century
On loan from a private American collection

The exhibition Russian Sacred Art will bring together more than fifty 19th century icons and other religious objects, drawing on a significant private American collection of icons.

Of all the treasures of sacred Russian art, 19th century icons are the least well-known and appreciated.   The exhibition Russian Sacred Art is the first presentation in North America of the artworks coming from a remarkable private collection of 19th century icons. A distinctly realistic style of icon painting emerged during the reign of Peter the Great. Peter’s westernizing reforms brought new art styles to Russia adding a modern twist to age-old Orthodox worship. Considered a ‘new-fangled ill’ throughout the 20th century, 19th century icons are promptly entering the contemporary art scene as artworks of great interest to collectors and museums.

Also included in the exhibition is an altar cross on loan from the collections of the University of St. Thomas.