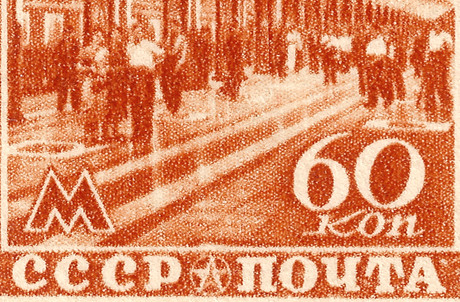 Visited by millions of people daily, the dazzling Moscow metro stations are truly subterranean palaces for the masses. Despite the austerity and privations of Stalin’s despotic rule, a humane urban environment was created for mass transit in the 1930s. Mosaics and sculptures of workers and peasants taught the lesson of socialism, at the same time imparting a sense of empowerment to Soviet citizens passing through.

The Mayakovskaia Station, completed in 1938, was a marvel of engineering and design. Alexey Dushkin, the designer, developed a philosophy of subterranean space that he put to brilliant use in Mayakovskaia Station. Named after the famous poet Vladimir Mayakovsky, the station’s decorative concept followed his vision of a Soviet future. The station is decorated with graceful columns of stainless steel and pink semi-precious stone. Highlighting the ceiling are 35 fabulous mosaics by Alexander Deineka depicting a day in the Soviet sky, with paratroopers, airplanes, factory stacks and high divers. A traveler has but to look up and see the bright Soviet future unfolding above.