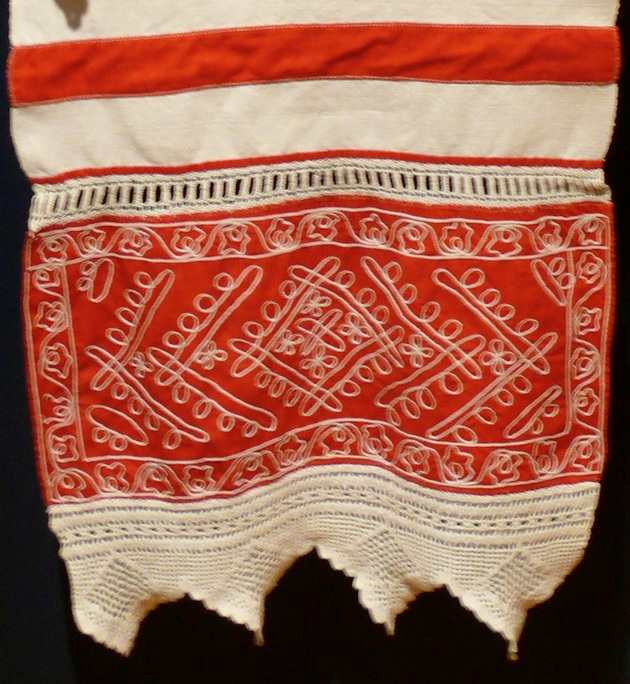 Russian traditional dress began to develop as a specific form in the 9th century. Until the early 18th century, peasants and boyars (noblemen) wore traditional costumes. In 1700, Tsar Peter the Great, with his admiration for all things from Western Europe, prohibited wearing traditional dress in cities. It was the Russian peasantry who preserved the richness and beauty of traditional Russian dress.

There are two major types of Russian ethnic dress: the sarafan and the poneva. A sarafan is a loosely fitting long jumper dress worn over a long linen shirt and belted. A necessary component of traditional Russian dress, the belt was often worn under the sarafan. Sarafans were made from homespun linen or inexpensive printed cotton produced in the large textile factories of Moscow, Ivanovo and Vladimir regions. For special occasions, they could be made from brocades and silks and embroidered with gold and silver thread.

Sarafans were widespread in the northern provinces of the Russian Empire such as Vologda, Arkhangelsk, Pskov and Novgorod. The poneva skirt costume was commonly worn in the provinces south of Moscow, such as Tula, Voronezh, and Tambov. The poneva costume is considered to be the more ancient of the two. It consisted of the plaid or striped poneva skirt gathered on a string or wrapped around the hips, a long loosely fitting shirt with embroidered sleeves and an apron heavily decorated with lace and colorful trims. The scarf or traditional headdress was a mandatory element of the peasant outfit. On display are outfits originating from several distinct areas in northern, southern and central Russia.