Here is a peek-preview of our new exhibition “Leaders and the Masses” that was scheduled to open in early April but was halted by the pandemic. No matter what, our small crew, carefully practicing social distancing, managed to install most of it — to reopen when the virus is defeated.

The image is “Motherland Greets a Hero” (1961 oil on canvas) by Mikhailo Khmelko (1919-1996) in our Mezzanine Gallery today, March 24, is an astounding fourteen feet long. It is truly a sight worth seeing! (No wonder the subtitle of this exhibition is “Mega Paintings from Soviet Ukraine”). Our museum has never shown anything like this, although we have certainly exhibited quite a bit of Soviet art….never so large nor so Soviet!

“Motherland’ is represented by Nikita Khrushchev, Soviet Premier between 1958 and 1964. The hero is Yuri Gagarin, first human in outer space. Have a look at the photograph of the same event that happened at the Vnukovo Airport in April 1961. The people are not as close to the red carpet and are only on one side, with the first row taken by mostly Soviet Militia. On the other side is a brass band playing “We are Born to Make Fairytale a Reality.” 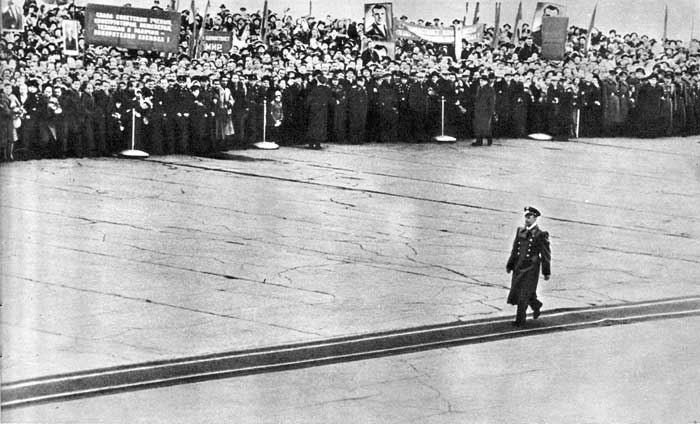 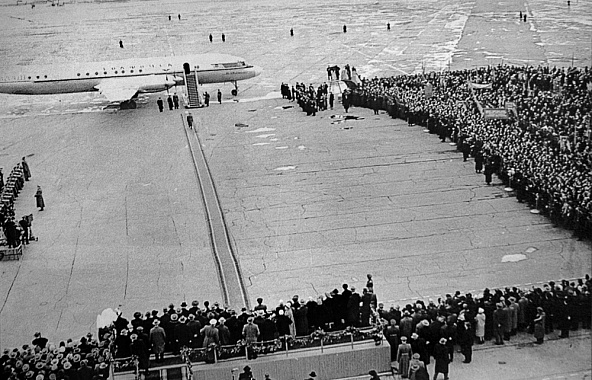