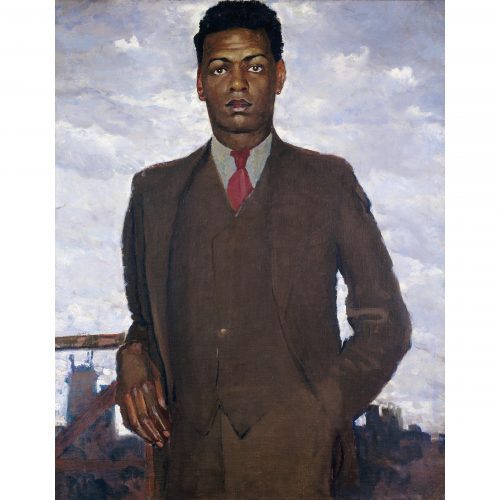 The exhibition presents the portrait of Lloyd Patterson (1910-1942), a participant of the 1932 Soviet-German film project Black and White intended to highlight racism in the United States. Patterson traveled to Soviet Russia in a group of 22 Black Americans to participate in the project. Among other group members were Langston Hughes, Louise Thompson, and Dorothy West, prominent literary figures and activists of the Harlem Renaissance, as well as Homer Smith Jr., a postal worker and journalist (from Minneapolis), Wayland Rudd, an actor, and others.

The film was never made and most of the participants returned to the United States. Lloyd Patterson stayed in Soviet Russia and married Ukrainian artist Vera Aralova. Their child, James (Jimmy), became the most famous Soviet child movie star of the 1930s, performing in the 1936 film The Circus.

The painting and related materials are on loan from Andy Leddy, who discovered the Patterson portrait in Moscow in 1992. Shortly after bringing the portrait home to Washington, D.C., Leddy saw a photograph of the Russian poet James Patterson in a National Geographic article and noticed a striking resemblance to the man in the portrait.  With the assistance of the article’s author, Leddy was able to meet with James, the former child movie star, and his mother Vera Aralova during his next trip to Moscow.  When he showed them a copy of the painting, which they had never seen before, they identified the man in the portrait as Lloyd Patterson.

Also included in the exhibition are photos and posters highlighting this fascinating episode in the history of Soviet–American cultural relations.

TMORA acknowledges and thanks the contribution of the lender.