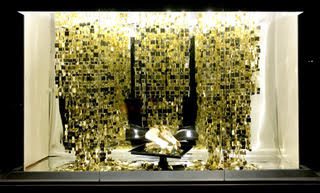 The Museum of Russian Art presents a solo exhibition of art by Andréa Stanislav featuring sculptural works, photo montages, collages, and multi-media pieces by this cutting-edge contemporary artist.  Sleek, rigid surfaces of industrial materials and soft textures of animal fibers intersect in Stanislav’s work.  These diverse art objects are an exploration of the unique and little known school of thought known as Russian Cosmism.

After the 1917 Russian revolution, Federov’s thought broadly resonated with early Soviet yearnings for the transformation of society and humanity.  Avant-garde authors, philosophers, and artists of the post-revolutionary period were taken with Federov’s grand vision of humanity’s future.  Cosmist thought was an inspiration and model both for the Soviet space program and Soviet-era science fiction, providing primary themes interwoven in Andréa Stanislav’s oeuvre.

Andréa Stanislav is a New York-based contemporary visual artist, who also works in Bloomington, Indiana, and St. Petersburg, Russia.  Her practice spans sculpture, video installation, and public art.  Andréa received a M.F.A. from Alfred University, NY, and a B.F.A. from The School of the Art Institute of Chicago.  Stanislav’s work has been exhibited and collected internationally at museums, galleries, public commissions, and art fairs, including solo exhibitions at the Mattress Factory Museum of Contemporary Art in Pittsburgh, the Museum of Cosmonautics – Moscow, and the Saint Louis Art Museum.  She is the recipient of a National Centre for Contemporary Art Residency – St. Petersburg; and McKnight Artists Fellowship, among others.  Andréa Stanislav is an Associate Professor of Sculpture and an Affiliate Faculty of the Russian and Eastern European Institute at Indiana University – Bloomington.

My transdisplinary practice melds sculpture, collage, and immersive media installation via a layered vocabulary of visual associations, and physical actions. Historical and conceptual informants are anchored in Russian Cosmist thought. I question the architecture of empires through the trajectory of space exploration — systems built on human capital, promising Utopic (or Dystopic) futures. The past, present and future are reflected through a spectacle of grace, horror, and the unexpected. Formally, I exploit the motifs of authority. Using symbolic structures, such as obelisks, monoliths and columns, I invoke monumentality. But, in my manipulation of these traditional markers, I disrupt their signal. I want my work to upend the myths they embody, to question the reverence that the forms inspire. Working with composers and choreographers, dance and music activates constructions of light, reflection, and movement — ultimately creating an evocative physicality of ideas where the participant questions their position in the present and future. 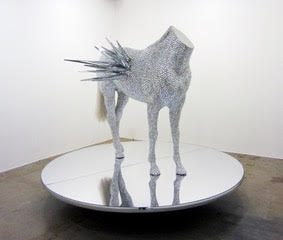