Celebrating a Century of The Dybbuk 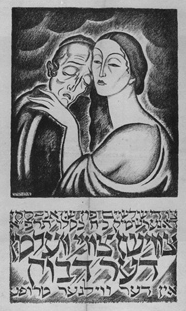 What’s highly dramatic, transgressive, and turning 100 this year? That would be the Yiddish classic, The Dybbuk: Between Two Worlds. Rimon:The Minnesota Jewish Arts Council celebrates the centenary of the first performance of S. Ansky’s seminal play with a virtual Artist Salon, A Century of The Dybbuk: 1920/2020. The Salon, presented as a Zoom webinar on August 27, 7 p.m., features premieres of newly commissioned Dybbuk-inspired work by musician Eddie Estrin and playwright Jenna Zark. Mark Meister, the Executive Director of The Museum of Russian Art, will moderate the discussion.

For further information, contact the Rimon office at 952-381-3449 or at rimon@sabesjcc.org.

Participation is free, but registration is required:

Moved by the Hasidic folklore he encountered, Ansky wrote The Dybbuk following his ethnographic tour of pre-revolutionary Jewish villages in Russia’s Pale of Settlement. Tragically, the author didn’t live to see the first production or bask in its reception. The Dybbuk has subsequently provoked numerous artistic responses, such as the landmark 1937 Yiddish film and Leonard Bernstein’s and Jerome Robbins’ 1974 dance drama.

The Rimon Artist Salon series builds on this history of artistic inspiration by commissioning Twin Cities-based composer Eddie Estrin and playwright Jenna Zark to compose short works that riff on a scene or theme in the original. Eddie Estrin, who recently completed a score and short film inspired by another mythic Jewish tale (The Golem), has composed three music videos for the occasion—Heart of the World, Who Will Remember You?, and Between Two Worlds. Jenna Zark has written a playlet, Will Not Leave, which will receive a reading by actors Ariel Leaf, Elena Giannetti, Scot Froelich, and David Jordan Harris.

A Century of The Dybbuk: 1920/2020 is co-sponsored by The Museum of Russian Art. Rimon is an initiative of the Minneapolis Jewish Federation.

Eddie Estrin has been vibrating the air with sound for a lifetime. As a naturally gifted drummer he played in teenaged bands and eventually took the spotlight as a rock vocalist and songwriter for successful touring band Rocking Horse. Subsequent incarnations found him composing original theatrical scores, as well as producing soundtrack work for indie films. His solo project, Pioneers of Aerial Photography, features ambient spontaneous soundscapes created in real time utilizing electronics, field recordings from travels around the planet, looping, and world percussion. Eddie Estrin remains an interesting solo performer, songwriter, and experimental improviser. His multi-instrumental work with keyboards, world percussion, acoustic guitar, and vocals, is well represented on his latest album “The Golem.”

Jenna Zark’s plays have been produced in New York, Los Angeles, and in regional theaters around the country. A Body of Water received its debut at Circle Repertory in New York. Her adaptations of two Eric Kimmel books, The Magic Dreidels and The Chanukah Guest, were commissioned and produced by the Minnesota Jewish Theatre Company. Other plays include If You Don’t Weaken (Freshwater Theatre), Alyeska, (Blank Slate Theatre), A Great Miracle Happened Here (Fresh Ink Series, Illusion Theatre), and I Wouldn’t Be Here and In Coya’s House (History Theatre). Zark’s play The World to Come was produced as a one-act by the Jewish Women’s Theater Project in Los Angeles and as a full-length drama received a reading at Playwrights Horizons. She is a two-time winner of the McKnight Advancement Artists Fellowship and a Minnesota State Arts Board fellowship winner. She is also a core alumni member of The Playwrights Center and a member of The Dramatists Guild.

The series is made possible by the voters of Minnesota through a grant from the Metropolitan Regional Arts Council, thanks to a legislative appropriation from the arts and cultural heritage fund. It is also funded in part by gifts from Bruce Goodman, the Oren and Sharron Steinfeldt Foundation, and two anonymous gifts.